Hersmia Reviews: Is hersmia.com a Scam or Legit online store? Read our review to see what experts have to say about this online store.

With online scams springing up every day, we have taken the responsibility of reviewing products, stores, websites e.t.c in order to save you from making wrong decisions. We have had a lot of readers sending mails asking about the authenticity of Hersmia Online store, this led to our review of Hersmia Fashion shop.

Our Review of Hersmia Ecommerce serves as an eyeopener. We hope it meets you well, and on time.

At the moment we wrote this review, Hersmia is an online store that claims to sell different types of fashion paraphernalia, ranging from clothes, bags, tools, boots, combs e.t.c According to the header on their homepage, they are offering free shipping for order over $69!

should you have a reason to worry about Hersmia.com online store?

5 Reasons Why Hersmia Store is Not Worth Your Money

In as much as the well designed platform of this store would make you think they are the real deal, the truth however remains that some fraudulent online stores do pay huge money to have their ecommerce platform look standard and convincing. This is because they know what they stand to gain by looking topnotch.

During our in-depth investigation about Hersmia.com we discovered the red flags listed below.

A quick look at Hersmia.com showed they are offering their products for unbelievable prices. The truth is that, this is the bait fake stores use in pulling customers.

After a thorough background search on who the owner/owners of this store is, we came up with absolutely nothing. This alone is an indication that the people behind this online store don’t have genuine intentions. If they do, they wouldn’t be hiding their details from whois

We all know that the ‘About Us’ page of every website is an important content that tells the plans of the owners of the site. When we checked this site using a plagiarizing tool, we discovered that they copied their ‘About Us’ page.

Same is applicable to their images. You only need to use ‘Google Search Image” to see the insincerity of this site. Online stores like this are a pain in the ass, as they hurt the earning of genuine sites.

Just like other scam online stores, this site is un-secure to shop. Except for an SSL certificate, this site has zero security measures. We advise that if you have shopped from this site and provided your financial information, you should change your card password immediately.

This action will save your money from being stolen by scammers.

What Customers Have To Say About Hersmia.com Site

Having listed all the cons of this site , it is important to read from those who had purchased from this online store. We were not surprised when we discovered that their reviews were all negative. Below this ecommerce site works.

This could be quite frustrating to those affected.

A customer has this to say about Hersmia Online Store-

Do not order through Hersmia.com, it is a scam. I paid $32 for a Steel Tongue Drum including shipping; I received a cheap t-shirt which read “Namaste in Bed”, women’s size medium (i.e. not my gender or size.) It is clearly intentional as the shipping number matches and the total on the invoice matches (as if I would pay $32 for this T-shirt.) Multiple emails to their “customer service” contact have not elicited any response. I also reported to Facebook as they are still running ads from theae scam artists

Hersmia.com is an Untrustworthy and unreliable online store. Their Facebook Ads don’t make them any legit. It is just a way to entice unsuspecting customers, and make them lower their guards. They are running Ads for tools, but they are a fashion store. This alone proves their intention is not genuine.

It is a pity that a thieving platform like Hersmia.com exists.

If you have been scammed by these lots, we advise you to immediately file a report with your bank. This would stop these lots from tampering with your account details in the future. 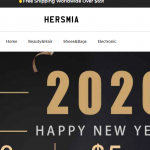 I ordered a steel drum that has never arrived. The order was confirmed and I was charged. Hersmia neglects to answer any email to obtain tracking info.
THIS APPEARS TO BE A SCAM COMPANY

At least you got something worth more than 99 cents LOL … I got a package from China (not even sure if it was from them as there were no identifying logos or words) with a small toy plastic umbrella in 2 parts maybe for a Barbie knock off or something.. No response to emails… Reported them to both paypal and facebook. They are definitely a scam front.

Same thing happened to me! I did receive a tee shirt (size small) that I didn’t order! I haven’t been a Small since I was eleven. What a SCAM! I really wanted that steel drum.

This Store is a Peace of shit scam

I ordered a comforter for $35, and received a $35 pr of socks.
E.mailed them several times. I receive nothing. So I am done with this site

January 2020 Ordered a massage gun from Hersmia.com and instead they shipped a woman blouse intentionally. The same with other buyers i read online. They didn’t want to offer return shipping back to discourage me from shipping back. stay away. Total scam.

I ordered the same massage gun and got a women’s coat! No response from emails sent that have been sent several times. I just now left a message on Facebook Messenger but I do not expect a response from there either.

Hersmia aka Maxacne is a scam. No item received and no communication from this company. Don’t waste your time and money.

I was also scammed by this place ordered the steel drum and sent me some small ugly shirt and will mot reply to me. Totally a SCAM!!

I have bought on hersmia.com two Alloy Steel Drums on 21st of Jan 2020 a.) The website provides information that business is being done out of UK, their listed address is: BUMPERR LTD G34 Stokenchurch Business Park Ibstone Road, Stokenchurch, High Wycombe, UK HP14 3FE b.) I recognized the items sent came from China. Aksing the seller at hersmia@outlook.com why they send from China on 22nd of Jan 2020 I did not get any reply c.) A packet was sent to me to Germany via Express, which arrives 11th of Feb 2020. d.) IN the packet I recieved only two… Read more »

I ordered 2 comforters.. and got 2 ‘sexy nighties’ that is a long bow across the breasts, and packaging ribbon for the rest of the body. I am a 63 year old woman.. not likely to wear the nightie.. lol I should have known better.

I ordered a blanket from this website, it took them forever to send it. When the package came it wasn’t a blanket at all it was a cheap flannel red shirt. I have tried everything to contact these people…no one responds to my emails. I paid 40.00 for this cheap shirt. Please don’t order ANYTHING from this site!

I ordered a black steel tongue drum and on Feb. 6 received an email that my order was on its way. Today is 2/26 and I picked up a package from them containing a flannel shirt! Total cost including shipping was $55. I will be contacting Chinese authorities.

The owners of hersmia site are just dishonests. I ordered at January two electric scissors with battery but i just received two women t-shirts. I sent mails but noone answers…78 euro for two blouses that costs to them under 1 euro. Thieves. Be careful.

I bought a steel tongue drum supposedly. Never got it. Out of China I did did a plastic toy umbrella in 2 pieces that was about the size of my hand. Let paypal know but they usually do nothing. They’re not as protective a sa standard credit card. So I don’t even know of the bogus item was from them or not…. but not worth more than 99 cents if that. I tried emailing them twice and got no response.

Ordered a lego set for grandson £50+ the payment was taken, email received to say item been shipped, never arrived and no response from Hersmia. Bank account has since been hacked having bought online safely from other companies on many occasions previously until this one.